High Business Debt Does Not Represent a "Bubble" 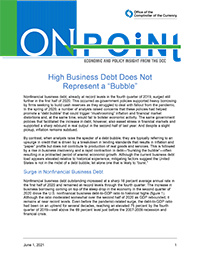 This publication is a part of:

Nonfinancial business debt, already at record levels in the fourth quarter of 2019, surged still further in the first half of 2020. This occurred as government policies supported heavy borrowing by firms seeking to build cash reserves as they struggled to deal with fallout from the pandemic. In the spring of 2020, a number of analysts raised concerns that these policies had helped promote a "debt bubble" that could trigger "mushrooming" inflation and financial market distortions and, at the same time, would fail to bolster economic activity. The same government policies that facilitated the increase in debt, however, also eased stress in financial markets and supported a sharp rebound in real output in the second half of last year. And despite a slight pickup, inflation remains subdued.

By contrast, when analysts raise the specter of a debt bubble, they are typically referring to an upsurge in credit that is driven by a breakdown in lending standards that results in inflation and “paper” profits but does not contribute to production of real goods and services. This is followed by a rise in business insolvency and a rapid contraction in debt—“bursting the bubble”—often resulting in a protracted period of anemic economic growth. Although the current business debt load appears elevated relative to historical experience, mitigating factors suggest the United States is not in the midst of a debt bubble, let alone one that is likely to "burst."