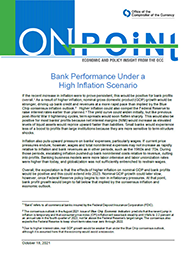 This publication is part of:

If the recent increase in inflation were to prove persistent, this would be positive for bank profits overall. As a result of higher inflation, nominal gross domestic product (GDP) growth would be stronger, driving up bank credit and revenues at a more rapid pace than implied by the Blue Chip consensus inflation outlook. Higher inflation could also compel the Federal Reserve to raise interest rates earlier than planned. The yield curve could widen initially, but like previous post-World War II tightening cycles, term spreads would soon flatten sharply. This would also be positive for most banks' profits because net interest margins (NIMs) would increase as elevated levels of liquid assets would reprice upward faster than liabilities. Small banks would experience less of a boost to profits than large institutions because they are more sensitive to term structure shocks.

Inflation also puts upward pressure on banks' expenses, particularly wages. If current price pressures endure, however, wages and total noninterest expenses may not increase as rapidly relative to inflation and bank revenues as in other periods, such as the 1960s and '70s. During those periods, escalating inflation pushed up bank noninterest costs relative to revenue, cutting into profits. Banking business models were more labor-intensive and labor unionization rates were higher than today, and globalization was not sufficiently entrenched to restrain wages.

Overall, the expectation is that the effects of higher inflation on nominal GDP and bank profits would be positive and this could extend into 2023. Nominal GDP growth could later slow, however, once Federal Reserve policy begins to rein in inflationary pressures. At that point, bank profit growth would begin to fall below that implied by the consensus inflation and economic outlook.